Brothers from the remote mountains of Mugu, twelve year-old Lalit and nine year-old Suman, were separated from their family with hopes of receiving a better education. Their mother Panmati was distraught after the sudden death of their father and attempted to take her own life. It was the tears of her young children that saved her and gave her hope to carry on.

With the help of villagers, Panmati came to know about a local person collecting children in their village to take them to an orphanage in city. Like other villagers living in poverty, she was lured by the promise of better education and brighter futures for her children should she afford to send her young ones to the city. Panmati raised substantial loans and paid Rs 50,000 per child to the trafficker. Her precious sons were admitted to an orphanage in Rupandehi.

Lalit and Suman were reunited with their mother in April 2018 and she was beside herself with joy to see and hold her beloved sons. 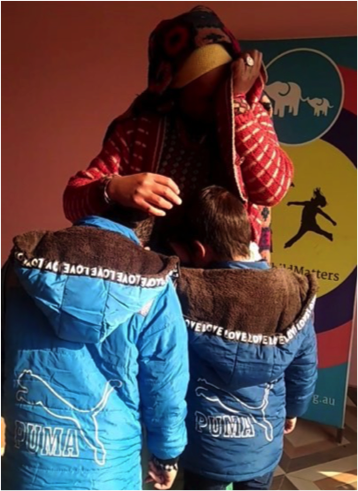 Our team travelled for a week by bus and foot to the remote hills of Mugu in May 2018. Here they spent time with the family to see how things were going since reunification.

We were pleased to be met with health and happiness and stories of family life in the village.

Panmati shared much praise and gratitude to our team saying she is very happy and grateful her family is complete.